I skipped out of work last Friday grinning like a fool in excitement. On Saturday, I hopped on a plane to Portland, Oregon with my good friend Nicole! It was time for an adventure. And time to relax. But mostly? It was time to explore!

I was going to compile a big list of things we did in Portland, but then I realized, we mostly just ate. So instead of a big What We Did In Portland post, here’s a combo, What We Ate in Portland post. Because honestly, no one’s going to care what we did when you see pictures of what we ate!

We left Saturday morning very early. I set my alarm for 5:15am. I planned to call Nicole at 5:30am to make sure she was awake. The Girl-Who-Never-Sleeps deserves another 15 mins, I figured. But, before I could call, Nicole was texting me. Yay! Both awake. I grabbed some toast with jam, threw on some clothes and called an uber. We we’re going to meet at the 19th Street BART station, but I was feeling lazy and didn’t want to walk to BART. I arrived 20 minutes early instead. Oops! But, really, that’s not atypical for me when I travel. I love punctuality! Nicole arrived with 2 minutes to spare and we took the BART train to SFO and hopped on our flight. We were exactly on time (like Nicole likes it) and I didn’t break out in hives stressing about not being an hour early! So any day that doesn’t begin in hives is a good one. 🙂 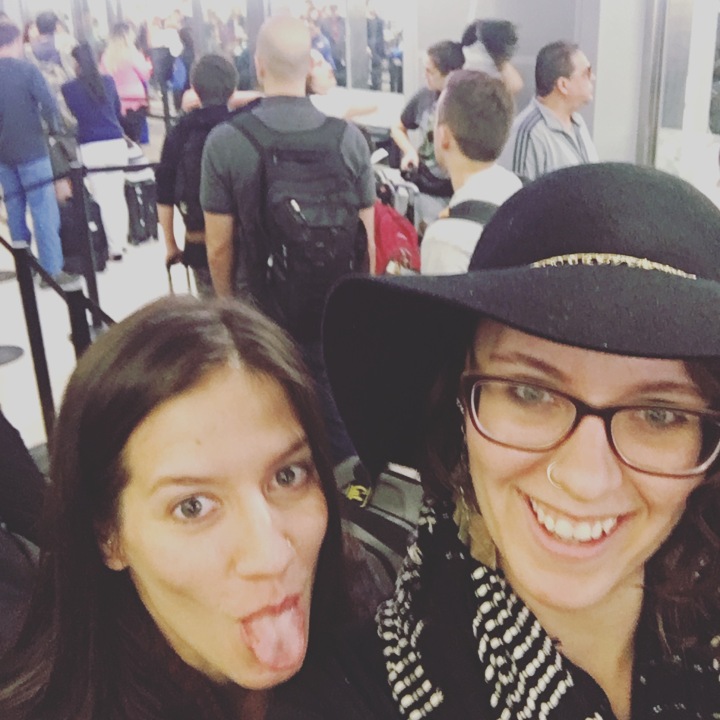 When we arrived in Portland Nicole’s awesome, interior designer friend, Nikki, picked us up at the airport. I knew I liked Nikki within minutes because she introduced me to the term “Pet-ophile” when talking about how she and her boyfriend Scott like to stare at dogs at the park and daydream about having one of their own. Which is exactly how I feel about every dog/cat/chicken I’ve ever met. I could tell we were going to be on the same page. From now on I shall refer to myself as a “pet-ophile” whenever possible. Because it’s hilarious!

Nikki drove us back to her house where we were staying and I met her boyfriend Scott who quickly became the funniest person I have ever met. Every other sentence out of his mouth was a joke and I don’t think I’ve ever laughed so much in my life! Nicole and I put on contacts and then we piled back into Nikki’s car (sans Scott) and headed to Hawthorne Street. We started out in a relaxed fashion, walking down Hawthorne and popping into any shop that caught our fancy like Lounge Lizard (oh my god, thrifting in Portland is so much better priced!), sipping at a mead tasting at Mead Market (oh, yes, now I’m daydreaming of beekeeping!), and wandering further. We considered stopping at Jam on Hawthorne for brunch, but a 45 minute wait had us walking further (though now I’m looking at their menu and my stomach is growling). I wanted to stop at some food trucks, but Nicole convinced me to venture further. We ended up at the perfect place! The Hazel Room was not only adorable, but so delicious! I found this picture just googling it, and now I’m wishing we’d been there in the snow. Look how adorable!

Nikki got the Vegetarian Bee Gees biscuit and gravy (I know, right, she’s also a vegetarian. Like she wasn’t already awesome!), and Nicole and I began the first of many shared meals, splitting the Rose Tea Crepes and Bubble & Squeak with a sunny side up egg.. We almost skipped the former, but we were so glad we didn’t as it was AMAZING. So good, you could really taste the rose-i-ness. Plus it was smothered in whipped cream and anything with whipped cream is my favorite. The Bubble & Squeak was maybe a bit healthier (okay, a lot healthier) with potatoes and veggies, but not nearly as exciting. Once we devoured our meal (literally took Nicole and I less than ten minutes to finish everything), we began meandering further down the street significantly more satisfied.

We stopped at nearly every shop, never buying a thing, but touching everything. It was fun to explore. Portland has some really cute vintage shops, thrift stores, and paper goods stores. We had a blast! We then ventured over to Division Street walking down 37th through a gorgeous residential neighborhood. There we stopped at Artifact which had lots of cool vintage clothes and furnishings. Nicole almost bought shoes. Since we were in the neighborhood, we couldn’t help but hit up the famous Salt & Straw. The Sea Salt with Caramel Ribbons was flat out the best ice cream I’ve ever tried in my life you guys!

Then we walked back to Nikki’s car and drove along the Willamette River to the St. John’s Bridge. It was a gorgeous day, but at this point, clouds had started to roll in. We wandered through the shops in St. John’s (while I relived every St. John’s moment from my newest favorite kid’s book Wildwood), before walking out onto the bridge a bit. I snapped this pic of Nicole and Nikki and then we headed down to the park under the bridge. 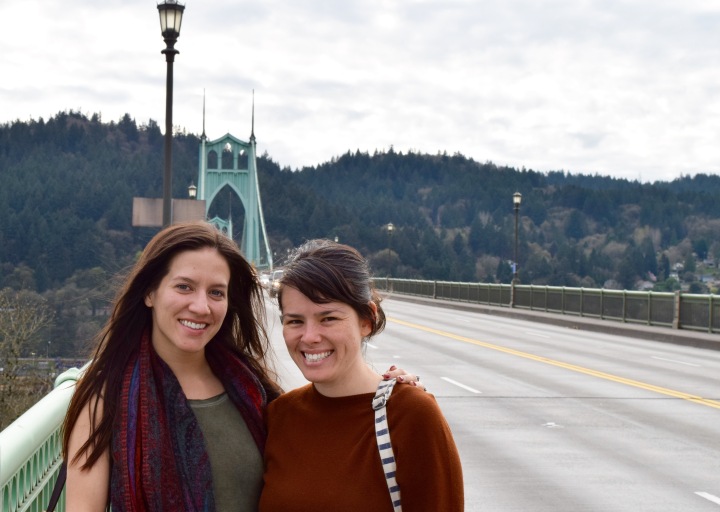 When we got to the park below, a wedding had just taken place! Naturally, I stalked the happy couple a bit. 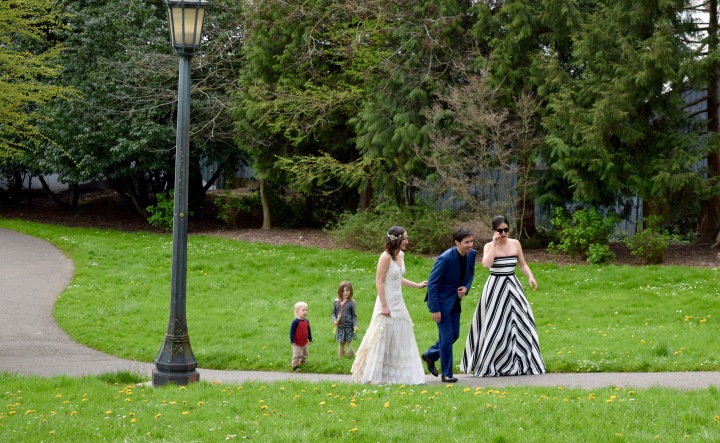 But the gorgeous bridge took up plenty of my attention. The architecture was amazing. Modern gothic and bee-ay-yoo-tee-full!

We decided to try and take a few pictures of the three of us while we were there so I propped my camera up on a wooden post and set the time. Fifteen pictures later we got one that was pretty cute. 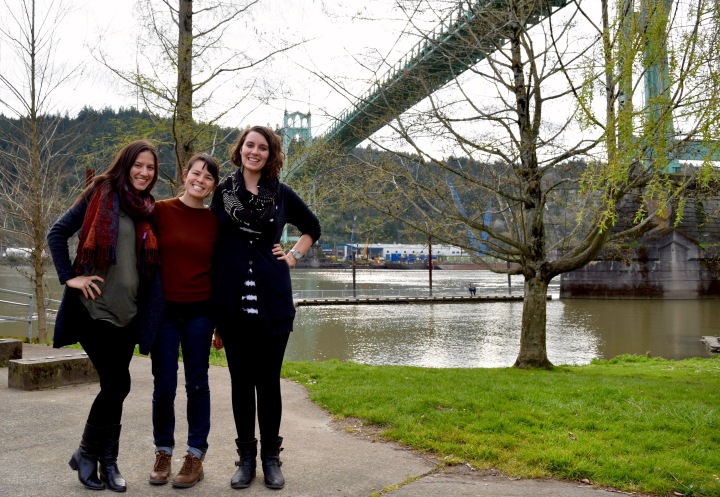 …as well as some fairly amusing outtakes!

Regardless, we had fun! And we were exhausted. We headed back to Nikki’s to relax after a long day. We stopped by Green Zebra Grocery for cheese, soup, and a baguette before crashing on Nikki’s couch and watching a dolphin documentary on Netflix, Dolphins: a Spy in the Pod. The documentary was hilarious and involved spy-creatures. Everything was “the first time this has ever been recorded” and we learned all about urogenital slits. Yup, you read that right. We headed to bed early.

We woke up the next morning, Sunday, and headed to Milk Glass Market for breakfast. There was a bit of a line, but as soon as we ordered a table opened up. Nicole and I got excited and over ordered: Fig & Anise Panini with goat cheese, Bread pudding with marscapone and jam, a snack hard boiled egg, and a Biscuit with tomato marmalade, and cheese. Scott got a cinnamon roll that he graciously shared. We basically rolled out of there! The decoration of the space was super cute! I wish I’d snapped more than a quick and dirty iPhone shot. Check out their website for awesome brunch space ideas. I just love those bread boards.

After breakfast we jumped into Nikki’s car and drove up to the Pittock Mansion. This was another Wildwood spot and I was excited. I love big houses and I cannot lie, (those other brothers can’t deny). We pulled up and parked. It was gorgeous! The weather was misty, but no rain yet. The views from the Mansion were incredible. You could see the entire city of Portland as well as the surrounding forests and hills.

I loved seeing the ship yards through the trees.

We tried to take a picture of ourselves in front of the view, but it started raining and the water droplets on my lens made Scott a little fuzzy. We managed to squeeze in a semi-normal shot.

The Mansion itself was beautiful too, but honestly, nothing man-made holds a candle to nature.

Inside were gorgeous rooms and furniture. The museum collected furnishings to showcase different styles of the period rather than preserving a moment in time. My favorite room? The pantry! 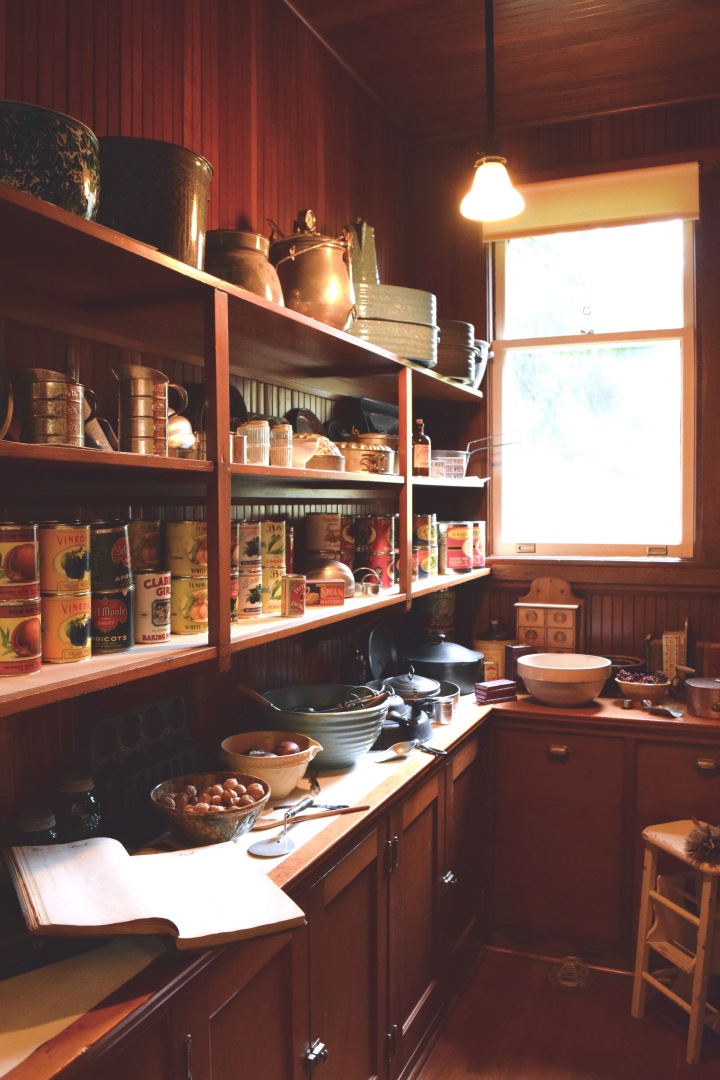 Outside again, Scott tried to scare us… 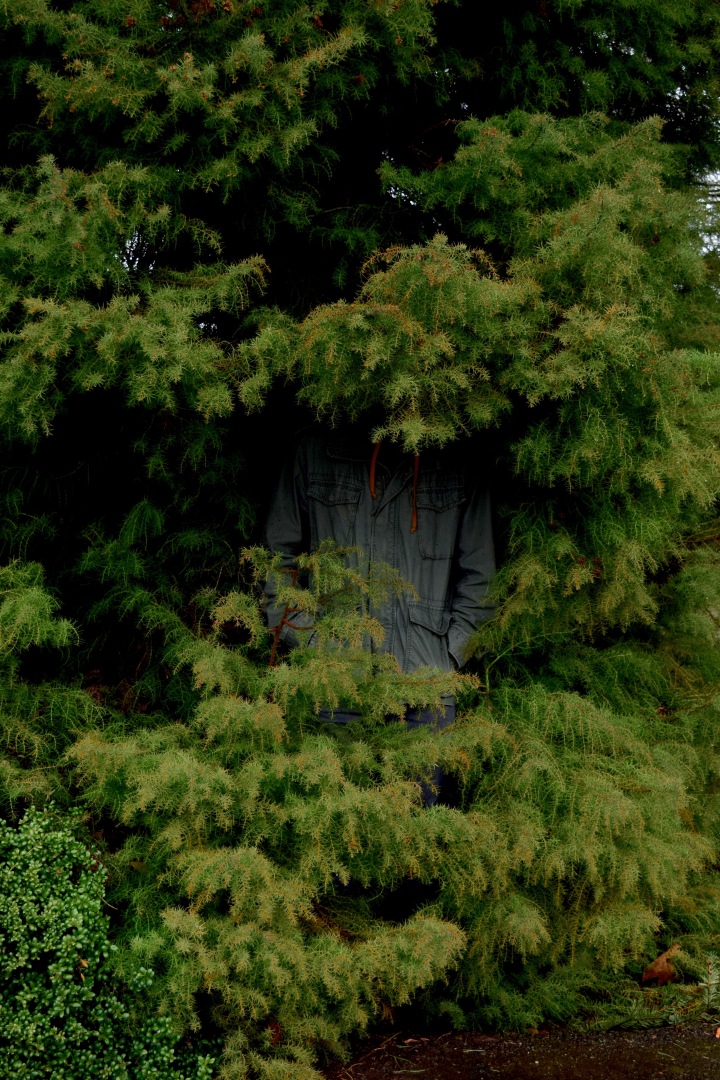 …it did not succeed. Then Nikki hopped on his back and they raced Nicole up the hill towards a trail head. 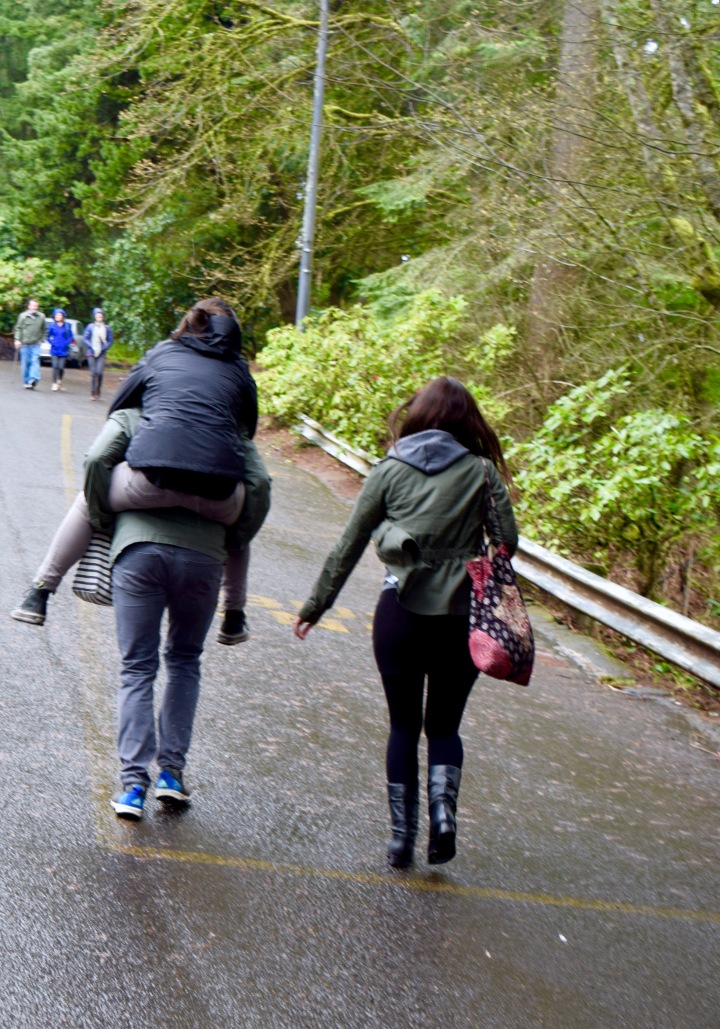 The trail was ridiculously muddy, so we didn’t hike it, but Scott ran down the trail a little ways. Hi, tiny Scott! 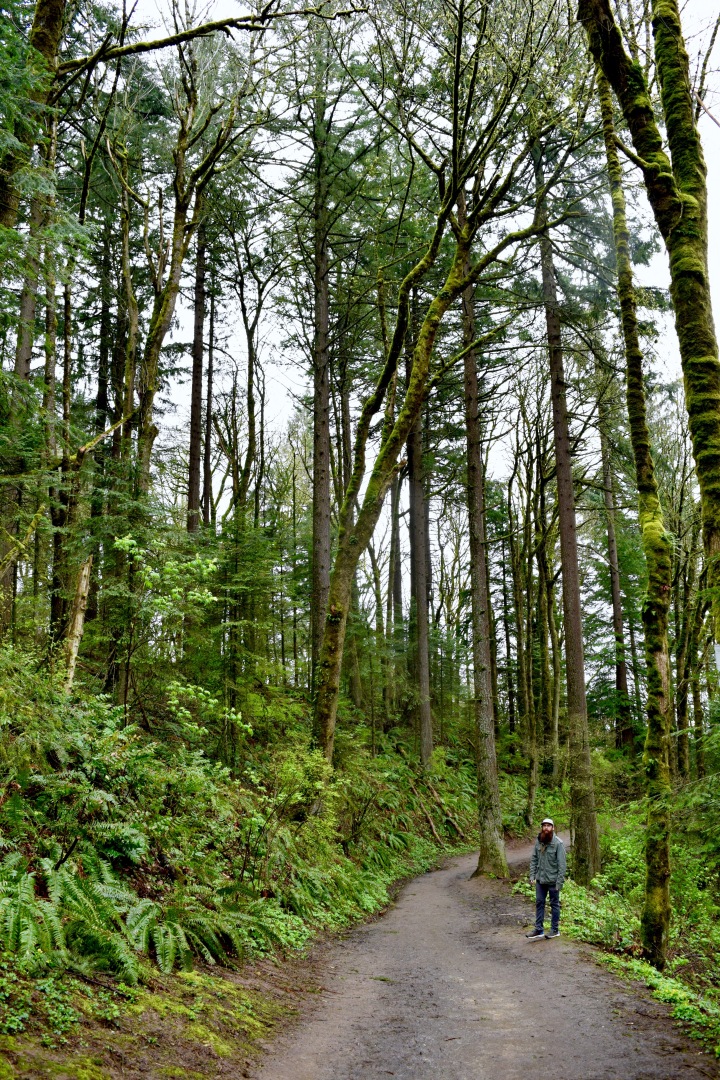 The forest was lush, green, and gorgeous here. It looked like a fairy tale forest. I kept expecting Hansel & Gretel or Snow White to show up! As long as we avoided the Big Bad Wolf, I was happy.

After a bit, we once again climbed into Nikki’s little Honda Fit and drove down the hill. We parked on NW 23rd Street and shopped a bit. We only popped into a few stores, compared with the previous day’s visit-all-the-stores! attitude, this was more chill. Which I’m sure Scott appreciated. We soon got hungry, jumped back into the car and headed to Dove Vivi. We got there right when it opened at 4pm. Actually, we arrived at 3:50pm and took pictures of the building across the street to kill time, before heading in. Look how colorful the building was though! I loved that Portland was full of treasures like this.

At the restaurant, we ordered halfs of the daily special Mushroom pizza, the Corn pizza, and the Blue Thyme pizzas.Yum. These had cornmeal crusts, which I don’t recall ever eating before, they were crunchy and mouthwateringly good. We chatted up the waitress, enjoyed our meal, and laughed like banshees at everything. Even when Scott paused in cracking jokes, we found something to giggle over. Like the fact that Dove Vivi classified all their beverages and threw in this at the end:

“Also… Milk” became a bit of an inside joke for the rest of the trip. We would say it randomly, frequently. We did a bit of research following this and discovered that Milk is the Oregon State Beverage. If you think that’s weird, you’re correct, but, as it turns out, more than ten states have milk as their state beverage! So strange!

We ended the night with fruity drinks at The Alibi  a tiki bar. A delicious way to finish off a busy weekend! Nikki and Scott had work the next day. Nicole and I were on our own! Time for adventures! I’ll talk more about what we ate in my next post.

How was your weekend? Take any trips? Have  you been to Portland before? Did you eat everything?? I’m still so full you guys…

4 thoughts on “We Ate Our Way Through Portland – PART I”