I mentioned here that while Nicole and I visited in Portland, Oregon we stopped in at the Goodwill Superstore on the Southeast side. Wowza! If you live in Portland, go there! It was amazing! Huge! There were rows and rows of clothes and entire section devoted to books. Books organized by genre! I’ve never been to a thrift store with a) so many books or b) books this well organized! Only United Airlines strict carry-on baggage allowances kept me from buying a large stack. That and the fact that I recently spent $40 on used books (that’s like 30+ books!) at the Blackoak Books moving sale in Berkeley. Hello my name is Laurel and I am a book-aholic.

This Goodwill Superstore had an entire aisle full of sterling silver, priced extremely low. This is where Nicole and I got truly excited. I had the idea of buying one of the smaller silver pieces and filling it with succulents. Because how adorable would that be? The answer is extremely adorable! We both decided to get small, packable, objects. Nicole ended up with a creamer and I found this fantastic sugar bowl which was missing it’s top. Perfect, since I needed it to be topless for the succulents anyways. We were ready for our friendship succulent planters now. 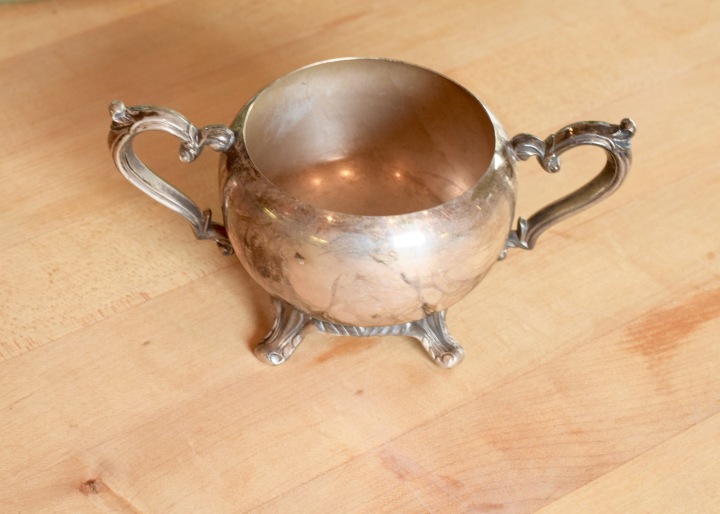 At home, I unpacked my sugar bowl. It was still adorable. Yay! This was such a great way to upcycle something sad and unwanted into something cute and happy. Here it is next to Fred for comparison sake. The little sugar bowl is  about 5 inches wide from tip of handle to tip of handle and only about 3 inches high.

I didn’t want to go out and buy succulents, because, why spend the dough when I can get them for free? Plus I need teensy tiny succulents. What did I do? I raided the driveway, which is lined with three varieties of succulents. I sliced off a few of the smallest off shoots from each variety and was ready to go!

I quickly popped a few small pieces of gravel into the bottom of the sugar bowl, added some potting soil, and gently stuck in the succulents. The sterling silver sugar bowl ended up being everything I imagined!

Not only was it super cute, but it was somehow playful and sophisticated. It makes makes me want to sip a hot cup of tea and speak in a British accent. Or should I say, “Ahhcksent?” Yes, maybe the latter is best.

I thought about polishing the sterling silver, but ended up deciding against it. Partially, because I am truly lazy, partially because I don’t have any silver polish lying around, but mostly because I love the patina it already has. The tarnishing is kind of beautiful and I love it, just the way it is.

As for the little mini-succulents– they were a perfect fit! I tried to find sprouts that varied both in height and size so there would be some movement. It worked out pretty dang well! My favorite variety are the little guys at the top that are tinged with purple at the tips. Anyone know what they’re called? I have planted several of them (there is even one in Fred). I’m a bit worried that they’ll grow crazy tall (like the one in Fred did), but until it happens, I’m not going to stress about it! I’m not sure why they grow so tall inside (maybe lack of sun?!), outside they get much larger and wider rather than growing straight up all skinny. I ended up bending the one in Fred underneath one of the leaves of the aloe vera, because it got so tall it started falling over. Crazytown!

Overall, I’m pretty psyched about this guy. My only issue is that now I want like fifteen more! I initially thought they’d look awesome on the window ledge above my bed. Then I tried to stick this little guy up there and realized that the window ledge in that room is shallower than elsewhere in the house. The little legs on the sugar bowl basically make it instantly attempt to catapult off the ledge. Don’t worry, I drop things so frequently that I am now fantastic at catching them. Some of the time. The sugar bowl is safe! RIP glass mason jar completely full of apple cider (I missed the fridge shelf yesterday afternoon…).

But clearly, I need to hit up Goodwill a few more times and pick up a few more sterling silver pieces to use as succulent planters. I can see them scattered everywhere in a house, sitting on top of stacks of books. Very English countryside. Very me. Especially the part about the books. Have you read Living History by Hilary Clinton? I read it several months ago and ironically what struck me the most about the book was a few simple paragraphs describing the interiors of Jackie Kennedy Onassis’ home. Filled with books! You got it people, if Jackie O did it, then it is beautiful, timeless, and oh so classic. Or at least that’s what I plan on telling anyone who asks if I need as many books as I own. Because, yes, yes I do. They make me happy.

Anyways, my new little sugar bowl is too cute and I am excited to make a whole bunch more! They would make fantastic little gifts, don’t you think? Party favors, wedding favors, birthday gifts, I can think of so much more!

I’ve decided to stick this little guy on my nightstand for now. We’ll see if that’s enough light to keep him happy. Hopefully so, because who doesn’t want to wake up next to something that dang cute?!

Have you ever upcycled something into a planter? Have any advice on raising succulents? Know what varieties of succulent I’ve found from my driveway?

One thought on “Silver Succulents”