Hello everyone! Guess what? Working crazy long hours is not conducive to blogging. Like, at all. I’d apologize, but my time card at work says it all. Plus, women apologize too much. I’m trying to break the habit. What’s everyone been up to? Ready for the Oscars? I’ve watched several of the movies this year, but didn’t quite make it to all of them. Room blew me away, though. It’s an emotional rollercoaster of a movie, but so fantastic and heartbreaking. The acting is phenomenal. I want it to win… everything! The Revenant’s been getting quite a bit of publicity, but I was sorely disappointed. I found it boring and very ridiculous. It was mostly a movie of someone walking and then every ten minutes something insane would happen, like he’d be thrown off a cliff or a bear would attack or something would be on fire. It just got to be a bit much…

Moving on from the Oscars, I recently read a fantastic book! It’s called My Berlin Kitchen by Luisa Weiss the author of the Wednesday Chef blog.  I hadn’t read her blog before and simply liked the idea of a book about Berlin when I saw it at a used bookstore. The book ended up being quite wonderful! Luisa grew up in Berlin and Boston. Since I went to college in Boston (Tufts, the same school Luisa’s father worked at!) and studied abroad in Berlin, I felt a connection with many of the places and foods she mentions. Her sweet story about finding love and where one belongs in the world really struck with me. Afterall, she basically lives my dream: travel the world, speak many languages, find amazing German man, marry him, live together in Berlin, raise German-speaking babies. Ahh… if only! Plus, the many recipes she includes are incredibly inspiring!

She mentions a Slow Roasted Bell Pepper Salad she learned to make from her mother and had me craving it right then and there. I had next to none of the ingredients she included in her recipe, but I did have bell peppers. Always one for innovation, I decided to plug forward on my own and give the Slow Roasted Bell Pepper Salad my own little spin. It was so incredibly easy and delicious! Peeling the bell peppers does take some time, but over all, it’s so quick. It may still be winter, but this recipe has me dreaming of hot summer days, barbecues, and long, hot hikes. The mix of sweet bell pepper and salty olives is invigorating. Topped with feta cheese, the whole thing is just perfect for a summer picnic… or a cold February day! I’ve made this three time in two weeks! It’s just that good!

Breadcrumbs (I used a piece of German Steinerbrot that I toasted and crumbed myself the first time I made this, and whole wheat panko crumbs from Berkeley Bowl the second time. Both were delicious, so use whatever you have on hand!) 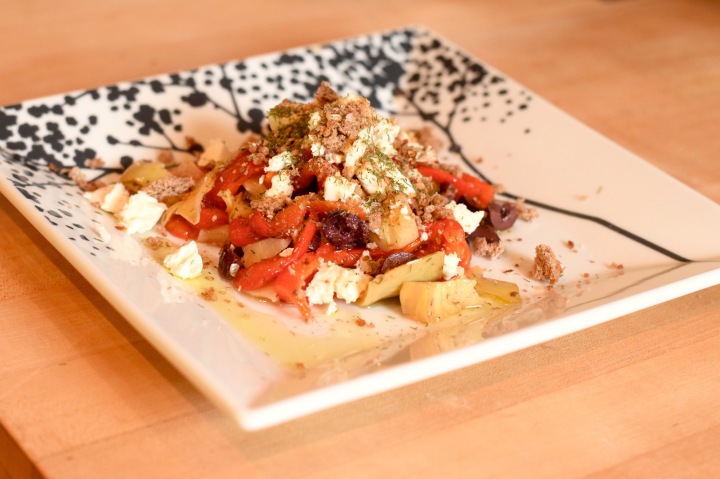 First pre-heat your oven to 375 degrees Fahrenheit. Wash your bell peppers well and place on oven safe cookie sheet (lining this cookie sheet with compostable parchment paper will making cleaning up easier). Place the cookie sheet in oven and roast the bell peppers for 45-60 mins. Turn bell peppers (I just use my fingers on the stems) every 10-15 mins as they roast. Slow roasting this way (as opposed to quickly over open flame) makes the bell peppers sweeter and more delicious. While they roast in the oven, chop up your artichoke hearts, olives, and garlic in to fine pieces no larger than 1/4 inch. Place these into a medium sized bowl and stir well together. This won’t take long, so you’ll have time to clean up, before moving on to the roasted bell peppers.

When the bell peppers are well roasted (black in a few little spots with crumbly skins), remove them from the oven and let cool until you can handle them easily. Then begin peeling their skins off. Rubbing with a clean dish towel may help with this. Drying your hands frequently will help you peel more easily too. As you peel them, shred the bell peppers into thin strips with your fingers. Place peeled, shredded bell pepper into the same bowl as the olives, garlic, and artichoke hearts. Add olive oil, salt, and pepper. Toss together and serve sprinkled with feta cheese (I like quite a bit!) and bread crumbs. 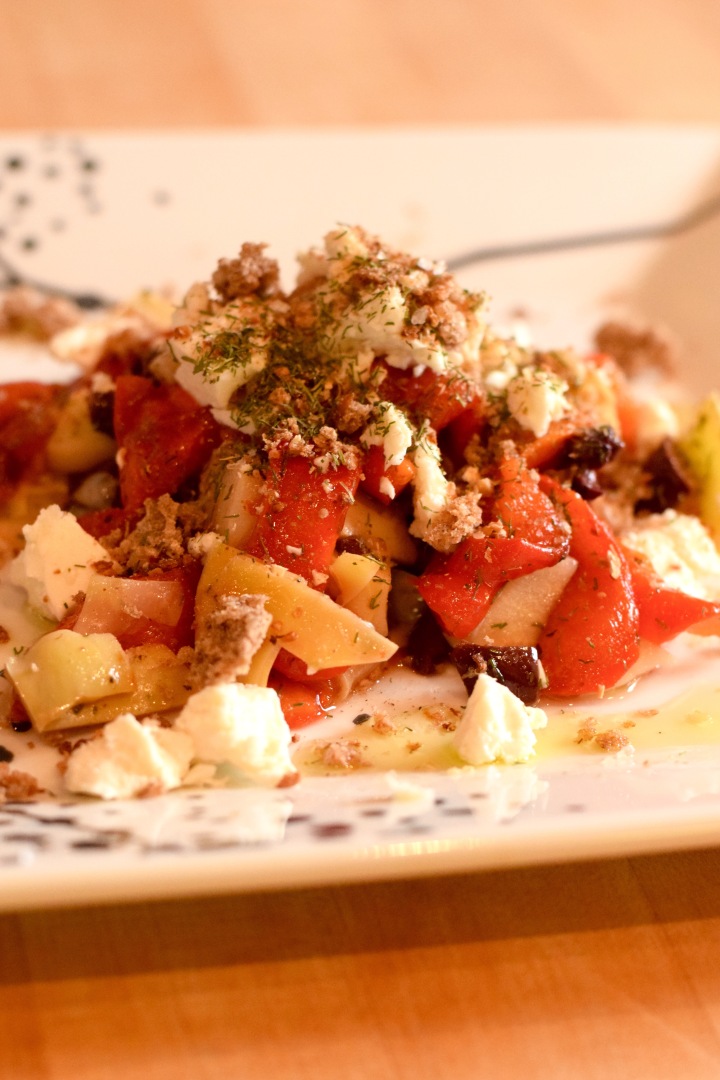 Hope you find this as delicious as I did! Look for My Berlin Kitchen if you want to try the original recipe. Have a great Oscars night, y’all!

These little explorers are the only two chickens from my flock actually willing to venture out in the snow. Seeing their little tracks in the drifts is just too cute! #berrybrierfarm
It doesn’t snow in Portland often. In fact these 12” are the most snow I’ve seen since moving to #Berrybrier! It’s exciting and magical as the whole city shuts down and people come out of their houses to sled and ski down the streets. I wandered out to get some breakfast pastries with a friend and snap some pictures of #berrybrierfrontyard but now I’m tucked in the house warm and cozy! Happy snow day Portlanders!
Today is a momentous day and after 4 years of hell, I’m so grateful for sanity. I love that yesterday was the last day America had never had a female vice-President. I’m hopeful that Biden and Harris can get some shit done now. In the meantime, I posted this on the blog too, but consider it my New Years greeting card to all of you! 😘
I keep getting bigger baskets to hold the surplus of eggs! These chickens are delivering and I am just too pleased to be reaping the rewards. Backyard chickens - BEST decision ever!
Let your voice be heard! My anxiety has never been so high, I feel like this country is on a dangerous precipice and no one knows which direction we’re going to fall. Please, y’all get out there and vote for democracy, humanity, and good deeds. Graphic by @duzansky
These chickens - oh my goodness - they have become such a light for me in this quarantine time. 🌅 They are so funny and curious and easy to care for! I’ve wanted chickens for years, so this really is a dream come true. The care for them is so minimal, I wish I’d done this ages ago! They know me and absolutely love people, especially if they get treats. Lotte is obsessed with the cats 🐈 and follows them all over the garden. They are a constant source of entertainment and amusement. If you have even a small sliver of yard, I highly highly recommend chickens!! 🐔🐥🐣🐤🐓 Oh! And the eggs are pretty great too! #backyardchickens #chickens #berrybrierfarm #berrybrier
After being held up by severe wildfire smoke and then a badly sprained ankle, it was refreshing to get back working on projects again today! 🔆 I finally finished the roof on the #chickencoop. 🔨 Now all this baby needs are some shutters! #berrybrier #berrybrierfarm
With Portland weather starting to turn more into fall, I keep finding myself on the couch hanging out under a blanket! This faux fur one from @everlasting_comfort is pretty amazing and I love that it’s fuzzy on both sides! I’m not ready for the return of the cool season though, are you? #teamsummerforever! #gifted #berrybrier #
The smoke 💨 has finally cleared in Portland and today was beautiful even with the rain. 🌧 I’m so excited to spend the last days of summer out in the garden prepping for fall and digging my hands I to the dirt before it gets too cold. How are you spending your last days of summer? Tell me 👇 in the comments! #berrybrier #berrybrierfrontyard
I’m seriously considering painting this bathroom the deep maroon color of my dining room. It’s so smokey in Oregon and I’m stuck inside so I might as well keep busy with something right?! #berrybrierbathroom #berrybrier
My egg basket is starting to get a bit more colorful!! Can’t wait until all the girls are laying. #berrybrier #berrybrierfarm #backyardchickens
If I walk through the front garden in these pants, can you even see me? #camouflage #berrybrier #berrybrierfrontyard
Garden harvest (including eggs!). #berrybrierkitchen #berrybrierfarm #berrybrier
It’s been a JOURNEY with with this chicken coop! I was all gung-ho at first and then I got a serious mental block on the coop. It’s all primed as of yesterday and ready for paint. My goal was to finish it this weekend and I got pretty dang close! Check out my stories for a sneak peek! I just have the final finishing touches now. I’m so excited for this build! It’s been so rewarding building this little coop from scrap wood. Now I just need these free-loading hens to start laying!! #chickencoop #chickens #berrybrierfarm
Rug install day at a client’s office project! Everything @kushrugs makes is gorgeous and this modern plaid is no exception!
This picture I snapped at the Oregon Coast this weekend looks like the perfect color palette for someone’s home! I love how calming it feels even with some bold color (hello pink clouds and emerald forest!). #lolinspo
Advertisements
Advertisements
Loading Comments...
Comment
×